A knot. The simple act of tying one cord to another. This is the first step in creating macramé. Tying many knots together creates a fabric, a sturdy textile not unlike weaving or knitting. One of the earliest recorded uses of macramé knots as embellishment appeared in the carvings of the Babylonians and Assyrians, depicting the plaiting and braiding that adorned the clothing of that time period. The Moors, traveling north into Spain carried this knot tying technique with them where it then spread to France, Italy and throughout Europe.


Queen Mary II taught this art to her ladies-in-waiting in the 17th century. Sailors created macramé objects during their long days at sea to trade or barter with when ashore. This spread macramé to the Orient and the New World.


Macramé was most popular during the Victorian Era where it was used for trimmings, embellishments, tablecloths, bedspreads and curtains.

During the 1970's when other crafts such as quilting, stitchery and needlepoint found their revival so did macramé. This time around the fine silk threads of the Victorian Era were replaced with rope, twine and hemp. It was during this time period that I learned the mystical art of knot tying! I made plant hangers and more plant hangers followed by Santas with fuzzy beards to hang on your front door and three foot tall owls to hang over your fireplace. Crazy stuff! And BIG!


But then the '80's came and it was time to move on to a more serious life of making teddy bears, kids' clothes and weaving. But as it's been said "everything old is new again" and so it goes with macramé but this time around it's known as micro macramé (teensy tiny). Still the same basic knots but done with finer cords and threads. At the Oakland Museum of California (OMCA) I first saw the work of Barbara Natoli Witt, herself inspired by archaeologist Marija Gimbutas and the symbolism of the Goddess. At that time I was entranced by her use of knots, cords, color but most of all beads and amulets.

I remember first seeing the beautiful work of Sandy Swirnoff at The Shepherdess in San Diego in the late 1990's and not even recognizing it as macramé because of her precise and tiny knots-solid, beautiful little works of art. Her work consisted more of knots than beads and I was later to learn that this type of knotting is referred to as Cavandoli Knotting, named after Valentina Cavandoli of Italy. This type of knotting (also called tapestry knotting) is done with a single knot, the double half-hitch, done vertically and horizontally. It forms a solid textile often with geometric shapes.


I was fortunate enough to visit the Museo Italo Americano in San Francisco in 2006 where a retrospective exhibition of the work of Barbara Natoli Witt was on display.  The gallery  described her as "a contemporary artist with the rare distinction of having created her own medium." Her work is stunning, just breathtaking. And it is all knots, perfectly executed, tiny little knots. 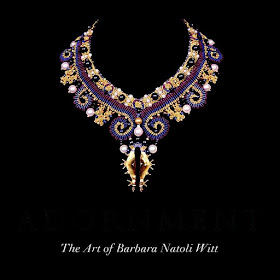 Still I did not indulge in this knot-making madness until about two years ago and I am now smitten with the knot. I personally tend to work more in a tapestry or Cavandoli form of knotting, though I love to use beads and metal work in my pieces.


Micro macramé is extremely portable, requires few tools and the basics can be learned in minutes.

Remember when you learned to tie your shoes? Well, this is even easier! Why "knot" give it a try?

We would love to hear what you have to say, please leave a comment.